UK Delivery Included
on all orders over £10

Stores & Stockists
throughout the UK

How We Made the British Vaping Flavour Map

You might have seen that we recently surveyed a sample of the great British public to find out what e-liquid flavours they’d like introducing in the future. The results were interesting to say the least, with some clear regional differences (who knew those in the West Midlands loved mojitos so much?). To best visualise the results, we thought what better way than to literally lay out all the top e-liquid flavour choices on a map of the UK. Unsurprisingly, there was a lot of mess and some interesting smells involved. Here’s how we did it.

After compiling the results of the survey and working out what was top of the vaping e-liquid flavour wish list, we spent over £100 on everything needed. This included many chicken tikka masala ready meals, cans of Diet Coke, chicken nuggets and enough apple crumble to cover Scotland and Wales.

Thankfully, flavours such as cockles, squid and Danish blue cheese didn’t make it into the top regional choices (though they were suggested by a few people), otherwise we really would have stunk out the office. 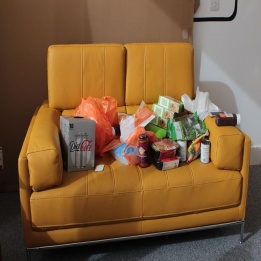 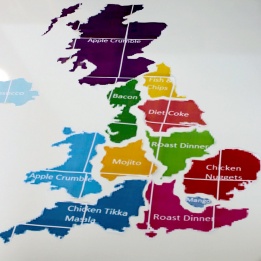 The Power of Brown Sauce

Once the regions were roughly separated and we’d taken a quick breather away from the tangy brown sauce smell, it was time to arrange the foods. We thought it best to start with the prosecco corks for Northern Ireland (kindly and worryingly donated from one staff member’s private collection) before moving onto the apple crumble.The theory was to leave the smelliest foods until last, mainly the chicken tikka masala. However, in practice this proved pointless as the brown sauce odour had already taken over and remains stuck to that sofa to this day. 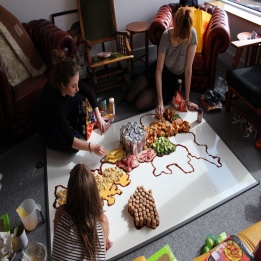 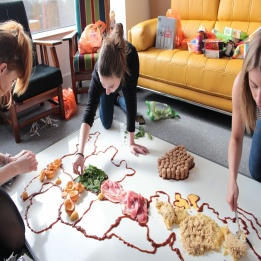 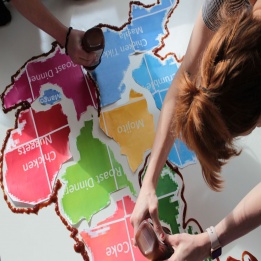 Filling up the UK

It was a real test getting the custard for the apple crumble to stay within the boundaries, requiring some delicate spoon action. And yes, it was cold custard along with raw bacon. Had we used cooked food the map would probably have looked a lot emptier, given the temptation to nibble. For the same reason the Midlands’ mojito section was made up of just lime, mint leaves and ice, with no rum in sight.

Sadly, it soon became clear that while the roast dinner sections surrounded by bacon, mojito ingredients and tikka masala all showed a range of colours, the mango chutney covering London didn’t look great on camera. It was swamped by chicken nuggets to the east and roast dinner to the south, while from certain angles the diet coke in Yorkshire dwarfed the fish and chips to the North East. 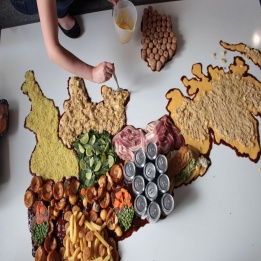 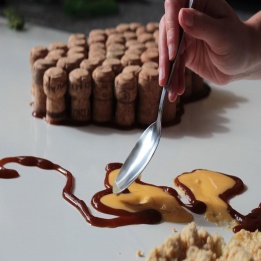 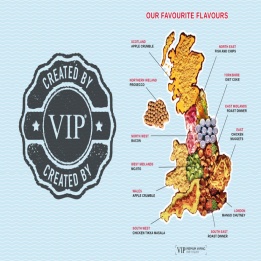 The Great British Clean Up

After the photoshoot it was time to clean up. Two hours later and coated in the delicious aroma of brown sauce, tikka masala, bacon, custard and more for the rest of the day, the four people it took were greatly rewarded with a can of Diet Coke. And being put off brown sauce for life.

The whole idea was inspired by VApril, with smokers challenged to switch from traditional smoking to vaping. You might not be able to get apple crumble vaping flavours just yet but there are some great vaping products to try that can help you take on the VApril challenge.

April has come to an end which can mean only one thing: it’s time to find out how our VApril heroes got on. How did they find the...

With April now at an end, we caught up with our VApril heroes to find out how they got on during their month-long vaping journey. Have ...

For most of us, April is a time of warmer weather and Easter egg hunts. But for a brave few, it’s the perfect excuse to give up n...

During April our VApril Heroes ditched their traditional cigarettes in favour of vaping. Did they make the grade? Or did they fail mise...

If you're a returning customer, you can log in and shop with VIP Electronic Cigarettes using your email address and password below.

To use the VIP Electronic Cigarette website you must be aged 18 years or over*.

Please verify your age to enter the site:

*18+ only. This product contains nicotine and is addictive.
For adult nicotine or tobacco consumers only.

Receive the latest news about our products!